The thrust of this festival of educational innovation was made clear in the opening keynote and demonstrated each subsequent day.     Humans, left to their own devices, can’t help but learn.  Those involved in education (everybody!)  can facilitate this potential if they recognize that passions help drive learning.
Sugata Mitra of Newcastle University gave a first-hand look at his famous Hole in the Wall experiment, in which he installed a computer in an urban slum and watched how students taught themselves and each other how to use it.   For many, this also involved learning English.  Abetting this was what came to be known at Big Ideas as the “granny cloud,” where retired British teachers communicated by Skype with the young people in India.  At Big Ideas, this initiative of involving community members in new modes of education made possible by digital connectivity surfaced again and again. Mitra showed how peer-learning and clever use of the digital world can make a dent in the social-justice issue of unequal access to resources.
The principal at a large middle school in Florida, Sharyn Gabriel, explained that only a few students have a cognitive reason for not reading at grade level.  It’s more a  case of disengagement.  “Students work for us because they know we believe in them,” Gabriel said.  When engaged, students will not only reach benchmarks, but find novel ways to lock into lessons and extend them.  Her school, meaning everyone in  the school, participated in a rally touting the wide universe of reading.  It’s visible at http://www.youtube.com/watch?v=x6D9jiEYxzs
The two full days of the Festival were structured so participants could begin making headway on new initiatives immediately.  Each morning and afternoon had a one-hour rapid-fire session with four speakers.  Following each session, small groups came together for 90 minutes to dream up something new and then clear a path toward realizing the dream.  Themes or stages of the four sessions were: identifying opportunity; leaving preconceptions behind and creating a design for the opportunity;  quickly “building” a prototype; and lastly, brainstorming ways to spread and scale their project.   Each group was charged with bringing their idea to life and presenting their prototype to the entire festival. 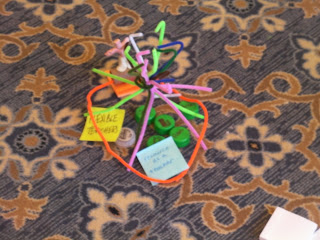 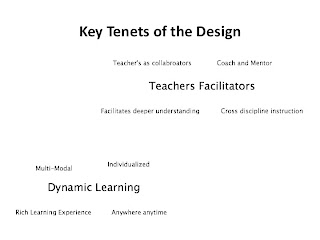 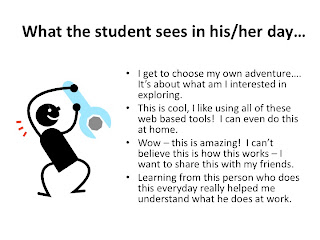 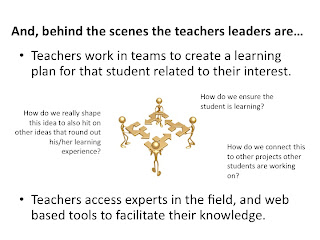 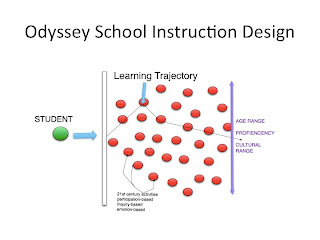 Erin McKeon, a founder of Wordnik.com, showed how an interactive resource can engage students of all ages by demonstrating how each word has a life of its own; its meaning(s) come from how the word is  actually used.  This is significant for students making connections between what they know. McKeon explained how each of us has four categories of words — ones we know and use; ones we know but don’t use; ones we don’t know and don’t use; and even words we don’t know but still use.
Trung Le of Cannon Design showed how designing the learning space with goals of improving student connectedness can pay big dividends.   I loved his African proverb, “If you want to go quickly, go alone; if you want to go far, go together.”
Ariel Saxe, a middle-school English teacher in NYC, emphasized the importance of speaking with students as if we’re talking in 2030.
She gave a new model for teaching careers: new teachers should teach a half-load while shadowing a master teacher during years 1 and 2;  then 5-10 years of classroom teaching though tenure; then what she calls teacherpreneurship, designing and using new ideas based on experience.   Students also need time for their own idea development.
Stephen Breslin of Futurelab showed how students are ready to design and build with guidance and a big emphasis on peer-to-peer instruction. He demo’d the whole-school design of a programmable interactive fountain; a wondrous creation that required a lot of learning along the way.
Jennifer Anastasoff described how experienced scientists, engineers, and mathematicians are transformed into teachers through EnCorps.  She offered this formula: smart people – y + x and kids = learning, where y is fear and lack of awareness about young people, and x is connecting and support.
David Merrill previewed the advent of a new toy-tool that has limitless potential for play and learning.  Sifteo Inc. has developed Siftables, a set of cookie-sized computers with motion sensing, neighbor detection, graphical display, and wireless communication systems that enable students to play and learn. I’m looking forward to the Sifteo play session I’ve scheduled.


Peer-learning and mastery at the Juggling Station.  David Merrill at left.
Christopher Rush gave an overview of the “School of One” concept and successful program being pioneered in NYC to a rapt audience.  The program’s inception mirrors a student’s launch into learning­­——leave room to fail at the beginning; success means not having all the answers right away.
The School of One offers a wide breadth of teaching modalities in a highly organized way; so that the proliferation of educational resources can really be used and so that there is no bottleneck.  Offering tutors online, for instance, can free the teacher for one-on-one teaching.  The School of One can provide  students with what they need, how they need it, and when they need it. At the end of the day students evaluate how they did with each learning component. In this way “preferences” can be set and reset for students.
Many participants learned how to start blogging and tweeting.  Many like me had preconceptions that tweeting was mainly self-absorbed recountings of what one had for breakfast.  But by following ISKME and other educational advocacy and research groups, one can follow links to a whole array of useful reports and articles.  (The only issue is that it can turn into a fun, total time-sink.)
Curtis Wong of Microsoft Research captivated the crowd with a demo of the Worldwide Telescope he pioneered for the net.  Trillions of pixels unifying images from Palomar observatory creates a planetarium anywhere.  Wong described it as showing “the architecture of contextual narrative,” new ways of teaching someone something completely new, starting with a story.  The site can drill down or up to show all corners of the universe. The ability to build mental models through interaction, and then refine and validate the models, has universal appeal. Hitting “pause” offers an opportunity to stop and look closely at unique places.  Individuals can create their own intergalactic “tours,” and Wong played an amazing tour created by an enthusiastic  6 year-old from Toronto. There are currently only 10k professional astronomers on earth—this site may inspire many more.
Salman Khan made a delightful presentation of his “one man band,” the Khan Academy.  Using only his engaging personality, breadth of knowledge, and an electronic white board, he has created an always-open school where students (and teachers) can learn and review mathematics (from Kindergarden to graduate school levels), science, and finance.  He has begun making history lessons, bringing the number of appealing 15-minute videos past the 2,000 mark.
Two speakers addressed open sourcing as critical for educational development. Mark Horner of the Shuttleworth Foundation, discussed successful expansion of learning texts in South Africa, allowing educators to overcome barriers of timeliness and cost.  Heather Joseph of the Scholarly Publishing and Academic Resources Coalition, showed the benefits of rapid digital dissemination of research results. I love her George Bernard Shaw quote:

Email ThisBlogThis!Share to TwitterShare to FacebookShare to Pinterest
Labels: #bif2010